This week we have Facundo Batista (@facundobatista) joining us. 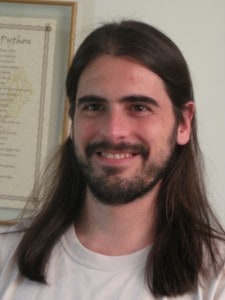 He is a Python Core developer from Argentina. If you happen to speak Spanish, then you might enjoy his blog. Let’s spend some time getting to know Facundo!

I’m a specialist in the Python programming language. With an experience
in it of more than 8 years, I’m Core Developer of the language and
member by merit of the Python Software Foundation. Also, received the
2009 Community Service Award for organizing PyCon Argentina and the
Argentinian Python community as well as contributions to the standard
library and work in translating the Python documentation.

I gave talks in the main Python conferences in Argentina and other
countries (United States and Europe). In general, I have a strong
experience in distributed collaborative experience, being involved in
FLOSS development, working with people around the globe, for more than
10 years.

Worked as Telecommunication Engineer in Movistar and Ericsson, and as
Python expert in Cyclelogic (Developer in Chief) and Canonical
(Technical Leader, current position).

Also love playing tennis, have a one year kid that is a wonderful little
person, and enjoy taking photos.

I needed to process some logs server-side, when I was working in
Movistar ~14 years ago.

Servers were running SunOS (!). I knew C and other languages not really
suited to do that task. I learned and used Perl for some months, until I
found Python and fell in love.

I have experience and worked with (although I won’t be able to use them
nowadays without some re-learning) COBOL, Clipper, Basic, C, C++, Java
and Perl.

My favourite of course is Python 😉

I really love the itertools core lib. And of course the decimal one,
that I wrote ;).

Regarding external libs, I’m a fan of Twisted, and these days I use a
lot BeautifulSoup.

Thanks for the interview!