PyDev of the Week: David Litvak

This week we welcome David Litvak (@dlitvakb) as our PyDev of the Week! He has presented at PyCon Argentina and PyCaribbean. Feel free to check out his website or Github to see what he's been up to. Now let's take some time to learn more about David! 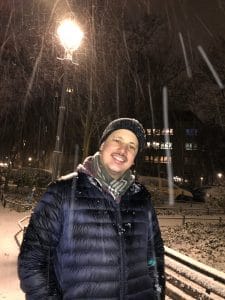 I've been working as a Software Engineer since 2007, just before I started my studies at UTN (National Technological University) for Systems Engineering, which after a few years of dealing between a full time job and lack of enthusiasm with the university, I ended up leaving. Though during those years I started my teaching career in Advanced Programming Techniques and Team Leadership Methodologies, which I still continue to contribute at remotely.

I eventually finished my degree as a Systems Analyst in UP (Palermo University), in February 2017.

My hobbies are very varied, from listening and ocasionally performing with some jazz bands, to combat sports such as MMA and HEMA. I also love teaching and playing Tabletop Role Playing Games.

On October, I moved from Buenos Aires to Berlin, and I'm thoroughly enjoying it.

Just a few weeks ago I became a father, JuliÃ¡n is now the receiver of my full attention.

Python came to me through my friend Juan Manuel GarcÃ­a, whom is a passionate developer and a very avid enterpreneur. We were doing a few classes together at the university, and everyday he would tell me about this new feature he discovered in this language I barely had heard of before. It was a gateway drug for my passion for many years to come.

Soon after that, PyAr, the Python Argentina community, organized a round of free (as in beers and freedom) gatherings, each week exploring a different aspect of Python in software development, from the basics, to performance optimizations, to creating a game with pygame, to making your first website with Django. This was a great kickstart for me to start diving deeper into web technologies and architecture. Also, at this event I met Facundo Batista, the president of PyAr, whom I have a long standing friendship with, and many other people who are my friends to this day.

A few months after that, in October 2008, I landed my first Python job with a US-based consulting company called Deviget.

Throughout the years I worked with many languages, mainly C, C#, VB.Net, Java, Javascript, PHP and Ruby.

I've also played around and have done some little amounts of work with other languages like Coffescript, Perl, Vimscript, Clojure, Moonscript, Haskell and C++.

My favourite languages are Python and Ruby, due to their expresiveness and versatility. They also both have very strong and fun communities with amazing people.

Currently I'm working on the Python and Ruby Contentful SDKs, integrations and example apps, you can take a look at them at https://github.com/contentful, they are all open source and propose very interesting challenges due to the complexity of our APIs.

My favourite Python library ought to be Requests by Kenneth Reitz. It's almost a staple in every project I start, and also my go-to reference library when I need to make a design decision on my own libraries.

Python has one of the nicest communities out there, reach out to them, through IRC, email or in person, you'll definitely be able to learn a lot and in the meantime make some of the best friends you'll ever have. This is a community of passionate, charismatic, and loving people!