What does it mean to profile ones code? The main idea behind benchmarking or profiling is to figure out how fast your code executes and where the bottlenecks are. The main reason to do this sort of thing is for optimization. You will run into situations where you need your code to run faster because your business needs have changed. When this happens, you will need to figure out which parts of your code are slowing it down.

This article will only cover how to profile your code using a variety of tools. It will not go into actually optimizing your code. Let’s get started!

Python comes with a module called timeit. You can use it to time small code snippets. The timeit module uses platform-specific time functions so that you will get the most accurate timings possible.

The timeit module has a command line interface, but it can also be imported. We will start out by looking at how to use timeit from the command line. Open up a terminal and try the following examples:

What’s going on here? Well, when you call Python on the command line and pass it the “-m” option, you are telling it to look up a module and use it as the main program. The “-s” tells the timeit module to run setup once. Then it runs the code for n number of loops 3 times and returns the best average of the 3 runs. For these silly examples, you won’t see much difference.

Your output will likely be slightly different as it is dependent on your computer’s specifications.

Let’s write a silly function and see if you can time it from the command line:

All this function does is cause an error that is promptly ignored. Yes, it’s another silly example. To get timeit to run this code on the command line, you will need to import the code into its namespace, so make sure you have changed your current working directory to be in the same folder that this script is in. Then run the following:

Here you import the function and then call it. Note that we separate the import and the function call with semi-colons and that the Python code is in quotes. Now we’re ready to learn how to use timeit inside an actual Python script.

Using the timeit module inside your code is also pretty easy. You will use the same silly script from before and show you how below:

Here you check to see if the script is being run directly (i.e. not imported). If it is, then you import timeit, create a setup string to import the function into timeit’s namespace and then we call timeit.timeit. You will note that we pass a call to the function in quotes, then the setup string. And that’s really all there is to it! Now let’s learn about how to write our own timer decorator.

Writing your own timer is a lot of fun too, although it may not be as accurate as just using timeit depending on the use case. Regardless, you’re going to write your own custom function timing decorator!

For this example, you import the random and the time modules from Python’s standard library. Then you create our decorator function. You will notice that it accepts a function and has another function inside of it. The nested function will grab the time before calling the passed in function. Then it waits for the function to return and grabs the end time. Now you know how long the function took to run, so you print it out. Of course, the decorator also needs to return the result of the function call and the function itself, so that’s what the last two statements are all about.

The next function is decorated with our timing decorator. You will note that it uses random to “randomly” sleep a few seconds. This is just to demonstrate a long running program. You would actually want to time functions that connect to databases (or run large queries), websites, run threads or do other things that take a while to complete.

Each time you run this code, the result will be slightly different. Give it a try and see for yourself!

In this example, we use the class’s __init__ method to start our timer. The __enter__ method doesn’t need to do anything other then return itself. Lastly, the __exit__ method has all the juicy bits. Here we grab the end time, calculate the total run time and print it out.

The end of the code actually shows an example of using our context manager where we wrap the function from the previous example in our custom context manager.

Python comes with its own code profilers built-in. There is the profile module and the cProfile module. The profile module is pure Python, but it will add a lot of overhead to anything you profile, so it’s usually recommended that you go with cProfile, which has a similar interface but is much faster.

We’re not going to go into a lot of detail about this module in this article, but let’s look at a couple of fun examples so you get a taste for what it can do.

Let’s break this down a bit. The first line shows that there were 4 function calls. The next line tells us how the results are ordered. According to the documentation, standard name refers to the far right column. There are a number of columns here.

You can call cProfile on the command line in much the same way as we did with the timeit module. The main difference is that you would pass a Python script to it instead of just passing a snippet. Here’s an example call:

Give it a try on one of your own modules or try it on one of Python’s modules to see how it works.

There’s a neat 3rd party project called line_profiler that is designed to profile the time each individual line takes to execute. It also includes a script called kernprof for profiling Python applications and scripts using line_profiler. Just use pip to install the package. Here’s how:

To actually use the line_profiler, we will need some code to profile. But first, I need to explain how line_profiler works when you call it on the command line. You will actually be calling line_profiler by calling the kernprof script. I thought that was a bit confusing the first time I used it, but that’s just the way it works.

Here’s the normal way to use it:

This will print out the following message when it finishes: Wrote profile results to silly_functions.py.lprof. This is a binary file that you can’t view directly. When you run kernprof though, it will actually inject an instance of LineProfiler into your script’s __builtins__ namespace. The instance will be named profile and is meant to be used as a decorator.

With that in mind, you can actually write your script:

So now you have two decorated functions that are decorated with something that isn’t imported. If you actually try to run this script as is, you will get a NameError because “profile” is not defined. So always remember to remove your decorators after you have profiled your code!

Let’s back up and learn how to actually view the results of our profiler. There are two methods we can use. The first is to use the line_profiler module to read our results file:

The alternate method is to just use kernprof in verbose mode by passing is -v:

Regardless which method you use, you should end up seeing something like the following get printed to your screen:

The source code is printed out with the timing information for each line. There are six columns of information here. Let’s find out what each one means.

If you happen to be an IPython user, then you might want to know that IPython has a magic command (%lprun) that allows you to specify functions to profile and even which statement to execute.

Once it’s installed, we need some code to run it against. The memory_profiler actually works in much the same way as line_profiler in that when you run it, memory_profiler will inject an instance of itself into __builtins__ named profile that you are supposed to use as a decorator on the function you are profiling.

In this example, you create a list that contains 1500 integers. Then you create a list with 9765625 (5 to the 10 power) instances of a string. Finally you delete the first list and return. The memory_profiler doesn’t have another script you need to run to do the actual profiling like line_profiler did. Instead you can just run Python and use its -m parameter on the command line to load the module and run it against our script:

The columns are pretty self-explanatory this time around. We have our line numbers and then the amount of memory used after said line was executed. Next we have an increment field which tells us the difference in memory of the current line versus the line previous. The very last column is for the code itself.

The memory_profiler also includes mprof which can be used to create full memory usage reports over time instead of line-by-line. It’s very easy to use; just take a look:

mprof can also create a graph that shows you how your application consumed memory over time. To get the graph, all you need to do is:

For the silly example we created earlier, I got the following graph:

You should try running it yourself against a much more complex example to see a more interesting plot.

The last 3rd party package that you will look at in this article is called profilehooks. It is a collection of decorators specifically designed for profiling functions. To install profilehooks, just do the following:

Now that we have it installed, let’s re-use the example from the last section and modify it slightly to use profilehooks:

All you need to do to use profilehooks is import it and then decorate the function that you want to profile. If you run the code above, you will get output similar to the following sent to stdout: 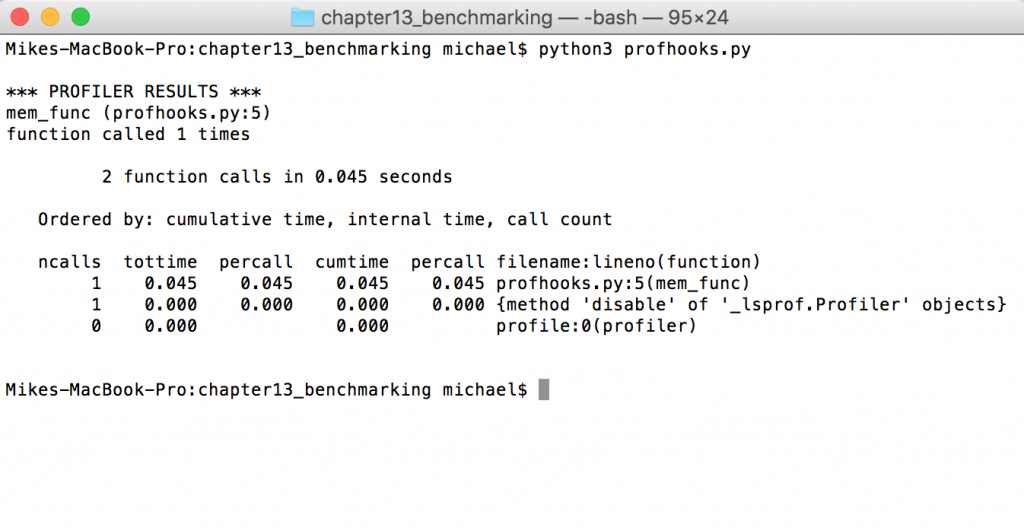 The output for this package appears to follow that of the cProfile module from Python’s standard library. You can refer to the descriptions of the columns earlier in this chapter to see what these mean. The profilehooks package has two more decorators. The first one we will look at is called timecall. It gives us the course run time of the function:

When you run this piece of code, you will see something similar to the following output:

All decorator does is time the execution time of the function but without the overhead of profiling. It’s kind of like using timeit.

The last decorator that profilehooks provides is called coverage. It is supposed to print out the line coverage of a single function. I didn’t really find this one all that useful myself, but you’re welcome to give it a try on your own.

Finally I just want to mention that you can also run profilehooks on the command line using Python’s -m flag:

The profilehooks package is pretty cool and has lots of potential.

You covered a lot of information in this article. You learned how to use Python’s built-in modules, timeit and cProfile to time and profile your code, respectively. You also learned how to write your own timing code and use it as a decorator or a context manager. Then we moved on and looked at some 3rd party packages; namely line_profiler, memory_profiler*and profilehooks. At this point, you should be well on your way to benchmarking your own code. Give it a try and see if you can find any bottlenecks of your own.