The Python Imaging Library (PIL) is a 3rd party Python package that adds image processing capabilities to your Python interpreter. It allows you to process photos and do many common image file manipulations. The current version of this software is in Pillow, which is a fork of the original PIL to support Python 3. Several other Python packages, such as wxPython and ReportLab, use Pillow to support loading many different image file types. You can use Pillow for several use cases including the following:

In this articla, you will learn how to do the following with Pillow:

As you can see, Pillow can be used for many types of image processing. The images used in this article are some that the author has taken himself. They are included with the code examples on Github. See the introduction for more details.

Installing Pillow is easy to do with pip. Here is how you would do it after opening a terminal or console window:

Now that Pillow is installed, you are ready to start using it!

Pillow let’s you open and view many different file types. For a full listing of the image file types that Pillow supports, see the following:

You can use Pillow to open and view any of the file types mentioned in the “fully supported formats” section at the link above. The viewer is made with Tkinter and works in much the same way as Matplotlib does when it shows a graph.

To see how this works, create a new file named open_image.py and enter the following code:

Here you import Image from the PIL package. Then you use Image.open() to open up an image. This will return an PIL.JpegImagePlugin.JpegImageFile object that you can use to learn more about your image. When you run this code, you will see a window similar to the following:

This is pretty handy because now you can view your images with Python without writing an entire graphical user interface. You can use Pillow to learn more about your images as well. Create a new file named get_image_info.py and add this code to it:

Here you get the width and height of the image using the image object. Then you use the _getexif() method to get metadata about your image. EXIF stands for “Exchangeable image file format” and is a standard that specifies the formats for images, sound, and ancillary tags used by digital cameras. The output is pretty verbose, but you can learn from that data that this particular photo was taken with a Sony 6300 camera with the following settings: “E 18-200mm F3.5-6.3 OSS LE”. The timestamp for the photo is also in the Exif information.

However, the Exif data can be altered if you use photo editing software to crop, apply filters or do other types of image manipulation. This can remove part or all of the Exif data. Try running this function on some of your own photos and see what kinds of information you can extract!

Another fun bit of information that you can extract from the image is its histogram data. The histogram of an image is a graphical representation of its tonal values. It shows you the brightness of the photo as a list of values that you could graph. Let’s use this image as an example:

To get the histogram from this image you will use the image’s histogram() method. Then you will use Matplotlib to graph it out. To see one way that you could do that, create a new file named get_histrogram.py and add this code to it:

When you run this code, you will see the following graph:

This graph shows you the tonal values in the image that were mentioned earlier. You can try passing in some of the other images included on Github to see different graphs or swap in some of your own images to see their histograms.

Now let’s discover how you can use Pillow to crop images!

When you are taking photographs, all too often the subject of the photo will move or you didn’t zoom in far enough. This results in a photo where the focus of the image isn’t really front-and-center. To fix this issue, you can crop the image to that part of the image that you want to highlight.

Pillow has this functionality built-in. To see how it works, create a file named cropping.py and add the following code to it:

The crop_image() function takes in the path of the file that you wish to crop as well as the path to the new cropped file. You then open() the file as before and call crop(). This method takes the beginning and ending x/y coordinates that you are using to crop with. You are creating a box that is used for cropping.

Let’s take this fun photo of ducks and try cropping it with the code above: 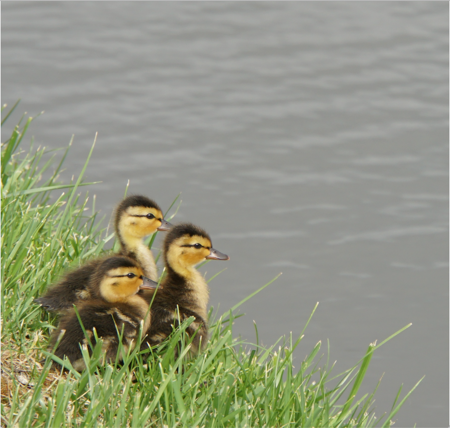 Now when you run the code against this, you will end up with the following cropped image: 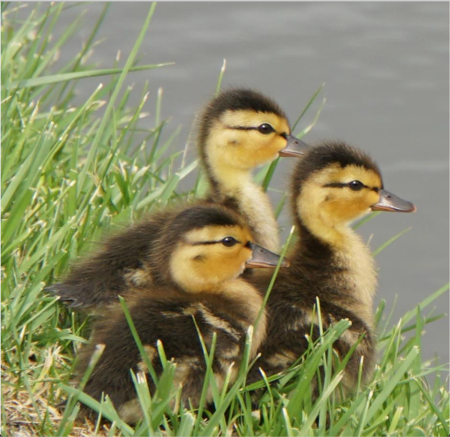 The coordinates you use to crop with will vary with the photo. In fact, you should probably change this code so that it accepts the crop coordinates as arguments. You can do that yourself as a little homework. It takes some trial and error to figure out the crop bounding box to use. You can use a tool like Gimp to help you by drawing a bounding box with Gimp and noting the coordinates it gives you to try with Pillow.

Now let’s move on and learn about applying filters to your images!

The Pillow package has several filters that you can apply to your images. These are the current filters that are supported:

Let’s use the butterfly image from earlier to test out a couple of these filters. Here is the image you will be using:

Now that you have an image to use, go ahead and create a new file named blur.py and add this code to it to try out Pillow’s BLUR filter:

To actually use a filter in Pillow, you need to import ImageFilter. Then you pass in the specific filter that you want to use to the filter() method. When you call filter(), it will return a new image object. You then save that file to disk.

This is the image that you will get when you run the code: 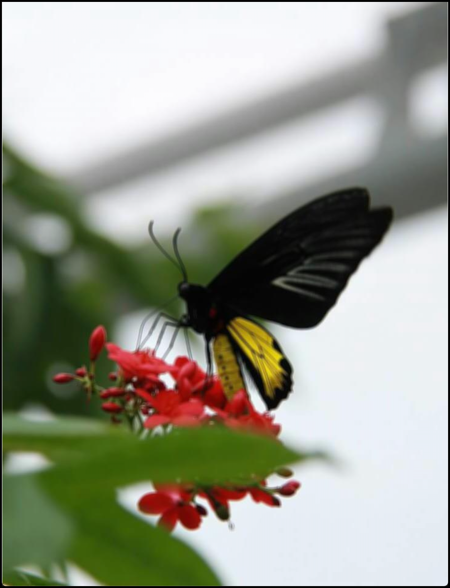 That looks kind of blurry, so you can count this as a success! If you want it to be even blurrier, you could run the blurry photo back through your script a second time.

Of course, sometimes you take photos that are slightly blurry and you want to sharpen them up a bit. Pillow includes that as a filter you can apply as well. Create a new file named sharpen.py and add this code:

Here you take the original butterfly photo and apply the SHARPEN filter to it before saving it off. When you run this code, your result will look like this:

Depending on your eyesight and your monitor’s quality, you may or may not see much difference here. However, you can rest assured that it is slightly sharper.

Now let’s find out how you can add borders to your images!

One way to make your photos look more professional is to add borders to them. Pillow makes this pretty easy to do via their ImageOps module. But before you can do any borders, you need an image. Here is the one you’ll be using: 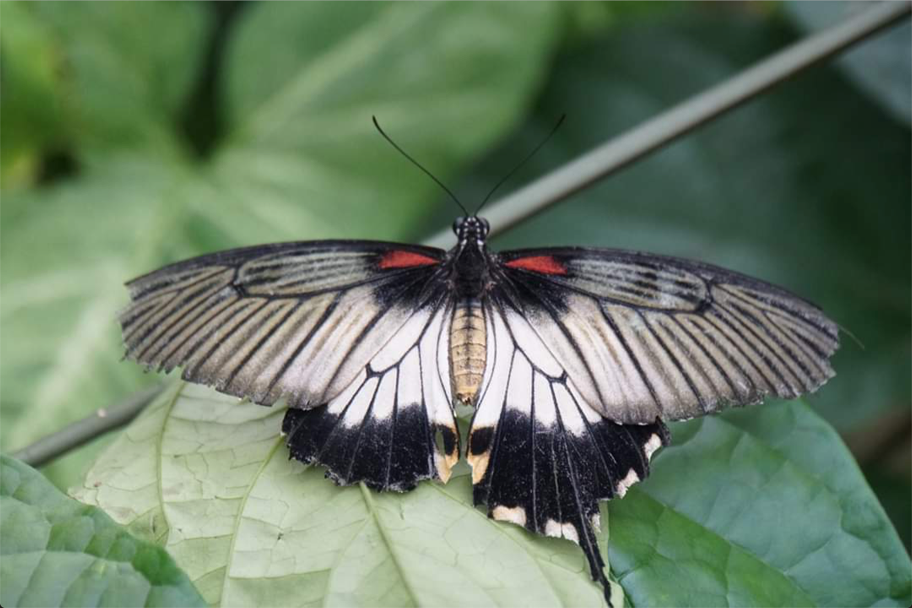 Now that you have a nice image to play around with, go ahead and create a file named border.py and put this code into it:

The add_border() function takes in 3 arguments:

In this code, you tell Pillow that you want to add a 100 pixel border to the photo that you pass in. When you pass in an integer, that integer is used for the border on all four sides. The default color of the border is black. The key method here is expand(), which takes in the image object and the border amount.

When you run this code, you will end up with this lovely result: 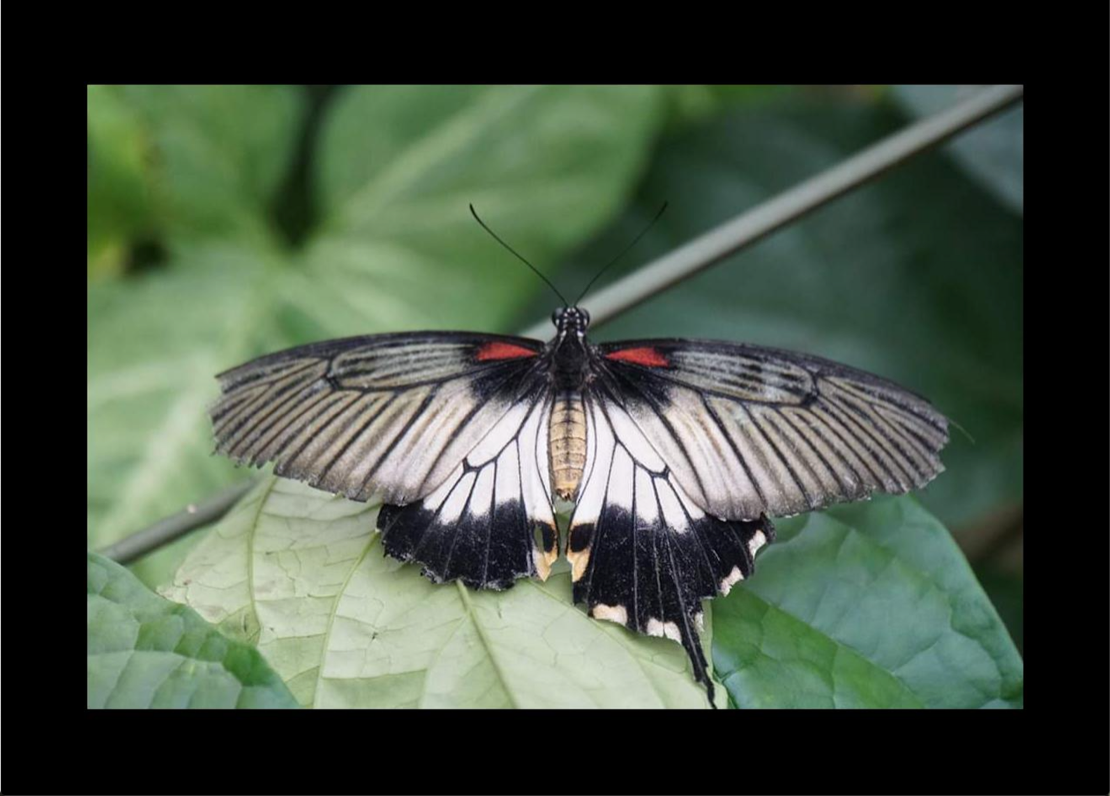 You can pass in a tuple of values to make the border different widths. For example, if you passed in (10, 50), that would add a 10-pixel border on the left and right sides of the images and a 50-pixel border to the top and bottom. Try doing that with the code above and re-running it. If you do, you’ll get the following: 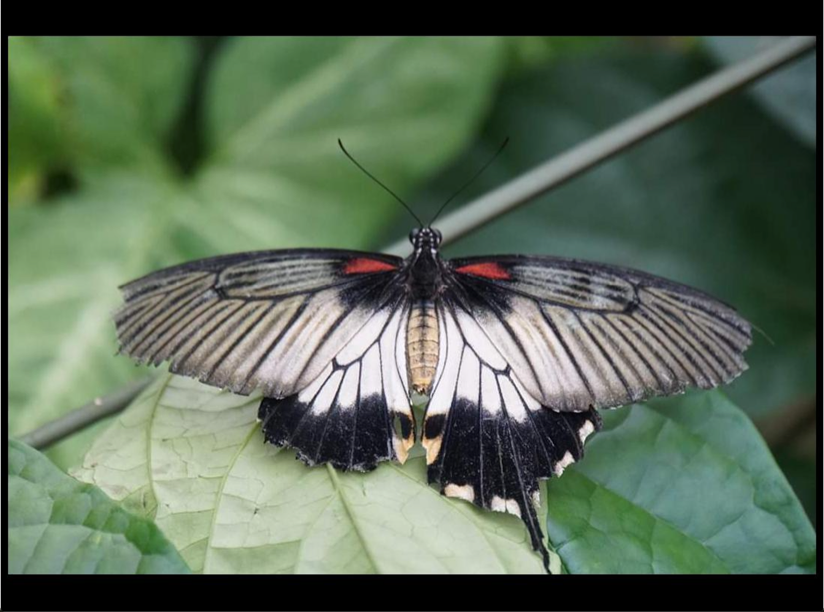 Isn’t that nice? If you want to get really fancy, you can pass in different values for all four sides of the image. But there probably aren’t very many use-cases where that makes sense.

Having a black border is nice and all, but sometimes you’ll want to add a little pizazz to your picture. You can change that border color by passing in the fill argument to expand(). This argument takes in a named color or an RGB color.

Create a new file named colored_border.py and add this code to it:

Now your add_border() function takes in a color argument, which you pass on to the expand() method. When you run this code, you’ll see this for your result: 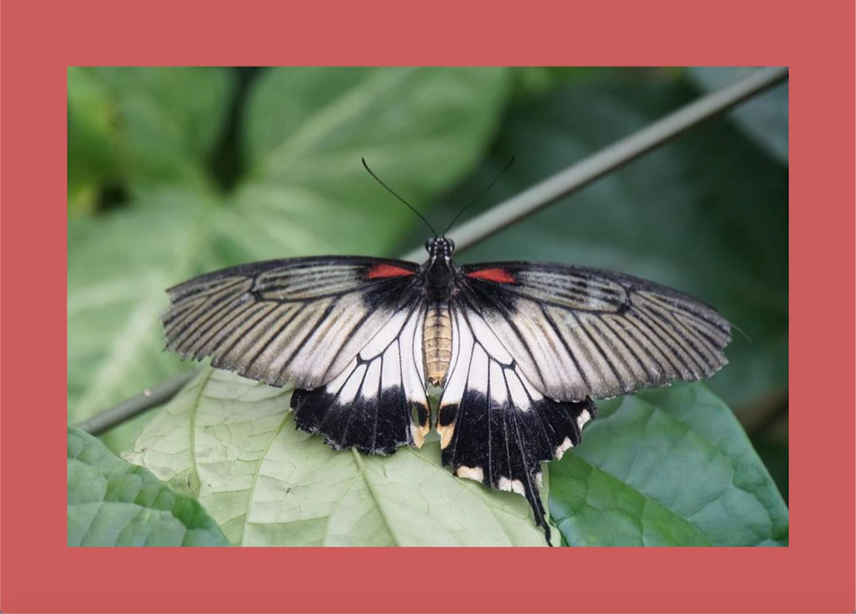 That looks pretty nice. You can experiment around with different colors or apply your own favorite color as the border.

The next item on your Pillow tour is to learn how to resize images!

Resizing images with Pillow is fairly simple. You will be using the resize() method which takes in a tuple of integers that are used to resize the image. To see how this works, you’ll be using this lovely shot of a lizard:

Now that you have a photo, go ahead and create a new file named resize_image.py and put this code in it:

Here you pass in the lizard photo and tell Pillow to resize it to 600 x 400. When you run this code, the output will tell you that the original photo was 1191 x 1141 pixels before it resizes it for you.

The result of running this code looks like this:

Well, that looks a bit odd! Pillow doesn’t actually do any scaling when it resizes the image. Instead, Pillow will stretch or contort your image to fit the values you tell it to use.

What you want to do is scale the image. To make that work, you need to create a new file named scale_image.py and add some new code to it. Here’s the code you need:

When you run this code, you will find that the result is a smaller version of the original image and that it now maintains its aspect ratio.

Pillow is very useful for working with images using Python. In this article, you learned how to do the following:

You can do much more with Pillow than what is shown here. For example, you can do various image enhancements, like changing the contrast or brightness of an image. Or you could composite multiple images together. There are many other applications that you can use Pillow for. You should definitely check the package out and read its documentation to learn more.

This article is based on a chapter from Python 101, 2nd Edition, which you can purchase on Leanpub or Amazon.

If you’d like to learn more Python, then check out these tutorials: