The Story of the Logo(s)

Last September, I thought it would be really cool to have a contest for my readers in which I would let them come up with some great logo designs for my blog in return for some prizes. You can read all about it here if you like. Alas, I received no designs whatsoever. I did get some positive comments from people and a comment or two telling me I was too cheap. Anyway, after that complete flop, I decided to ask some artist friends of mine if they'd be interested in doing it, but they also declined. What was this world coming too? Where were these "starving" artists that everyone talks about?

(NOTE: This post will have lots of pictures, so it might take longer than usual to load.)

Fortunately my brother knew someone who called himself the Killustrator (no idea if he was starving or not) whom he had met at G-Fest, a "festival" devoted to Godzilla and other Toho and Kaiju productions. You can see some of his work on Deviant Art. Anyway, he runs the business with his wife and they actually didn't cost any more than my contest would have. Let's take a look at how the logos changed through the design phase.

When I commissioned these, I told the artist that I wanted some kind of mecha logo and something that had a Narnian-like mouse battling a snake. I think I may have told him about my snake head idea too, but I don't remember for sure. Anyway, here are the first set of sketches: 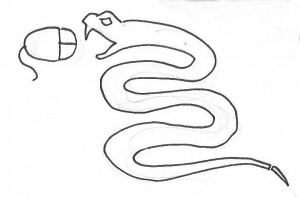 I kind of liked the above, but didn't think it would work very well as a logo. The same goes for the one below. 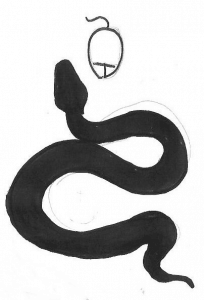 I liked this one. A snake eating itself is kind of disgusting, but I liked the concept. I may still commission this one at some point. 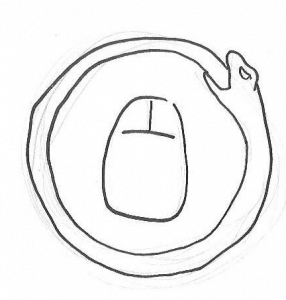 This is probably my favorite of the bunch. I like the almost steampunk look of that mouse. You'll see that the end result it much more polished, but I kind of wish I had the mouse made to look more like this original. 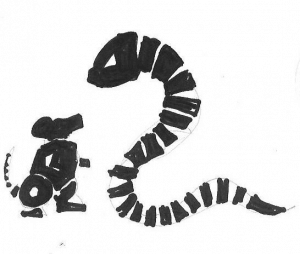 I wasn't sure what was going on in the image below when I first saw it, but once I realized what it was, I really liked it.

It took a while, but I finally got my Narnian mouse concept: 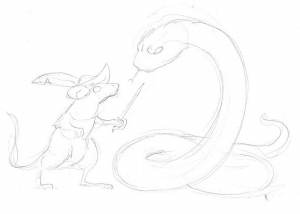 The artist came up with following two all on his own: 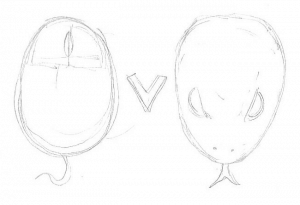 This was a logo concept in which the artist mixed the snake and mouse into the logo itself. I thought it was interesting and I probably should have had him work up a couple more examples, but I decided to just go with the snakehead, the Narnia one and the mecha.

Now that I'd made my choices, the next step was to have the illustrator polish them up and give them color. Let's take a look:

As you can see, the mecha-mouse has wheels instead of legs and ended up looking a little more "cartoonish". I still like it though.

I think the snake head looks much better with contrasting colors. It's a lot easier to see that he's snacking on a computer mouse. I think he must have gotten a wireless mouse though.

This ended up looking pretty cool. The mouse looks kind of like Reepicheep (from Narnia) and kind of like some kind of miniaturized 3 Musketeer.

After approving the pictures above, the illustrator turned them over to his partner and wife. She took them and polished them up some more and she also created the text part of the logo. Are you ready to check them out? If so, start scrolling! 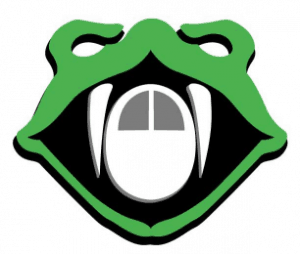 The snake head looks sharper and it's eyes look kind of dead. Creepy, but still neat. It's fangs grew a little too. I'm not sure what happened to his nose holes though. 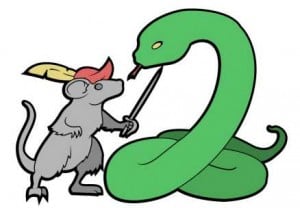 The Narnian picture got a little less detailed and the mouse changed hats and dyed his hair grey, but it mostly looks the same. 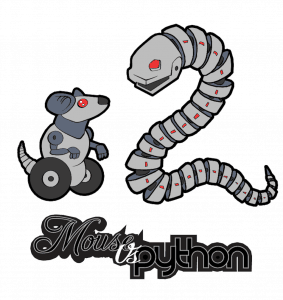 This one shows the mecha version plus the logo. I'm not sure how she matched the official Python logo font (and I didn't ask her to do so), but I think it turned out pretty well.

Now you know how I got my logos. I had them created to make my blog presence cooler and also so I could create some fun merchandise in the hopes that someone might like to purchase them and support the blog. I used Zazzle to create my store. I only get a 10% commission on the sale, so I doubt I'll make much. Even if no one outside of myself buys anything, I still think it was worth it. I like what I got and I hope you do too.