Python 101 Book: Behind the Scenes - The Cover

I had a lot of ideas for the cover of Python 101. My first idea was to go to the zoo and take some photographs of Pythons there, then pick the right one stick that on the cover. I have a lot of photo editing software, so I also considered taking the photo and changing it so it looked like a drawing or a painting. Then I started thinking about my blog and how my readers were the ones encouraging me to write the book in the first place. So I ended up going with one of my other ideas, which was to continue the Mouse Vs Python theme.

I ended up hiring an artist I know who did my original blog logos. His name is Tyler and he owns and operates Killustration Studios. You can see some of his work on deviantArt. Anyway, I told him my ideas for the book cover and I thought I would share the various versions of the cover as it evolved.

The following image is the first version of the cover. It's pretty rough, but I could see my vision taking shape: 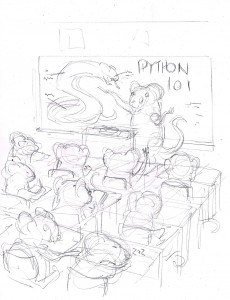 The next rough cover image is a little bit better, with more detail: 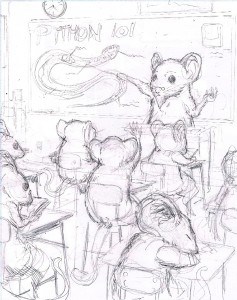 After approving the work, Tyler created a pencil version of the cover: 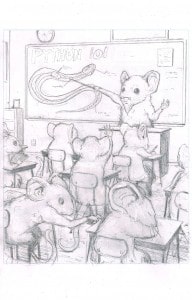 I liked this version and we continued.

Next up was getting the cover inked. I didn't realize there were going to be so many steps! 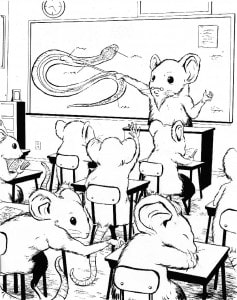 The Cover in Full Color!

The next step was to add color to the cover. I thought this one turned out really well: 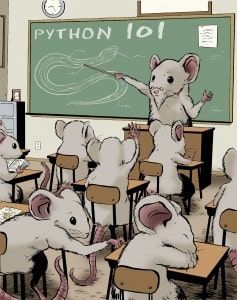 The last revision was adding my name to the title. 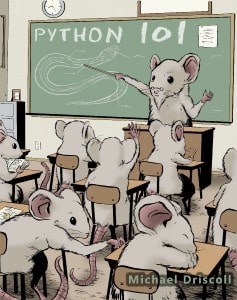 I have re-hired my artist to add some more fun art to the book. If you'd like to support the book project, please see the Kickstarter Campaign Page