Python includes a couple of modules for testing in its standard library: doctest and unittest. We will be looking at doctest in this article. The doctest module will search for pieces of text in your code that resemble interactive Python sessions. It will then execute those sessions to verify that they work exactly as written. This means that if you wrote an example in a docstring that showed the output with a trailing space or tab, then the actual output of the function has to have that trailing whitespace too. Most of the time, the docstring is where you will want to put your tests. The following aspects of doctest will be covered:

Running doctest via the Terminal

We will start by creating a really simple function that will double whatever is given to it. We will include a couple of tests inside the function’s docstring. Here’s the code:

Now we just need to run this code in doctest. Open up a terminal (or command line) and change directories to the folder that contains your script. I saved my copy as dtest1.py. Here’s a screenshot of what I did: 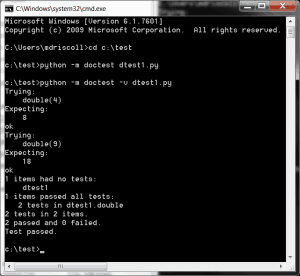 You will notice that in the first example, I executed the following:

That ran the test and nothing printed out to the screen. When you don’t see anything printed, that means that all the tests passed successfully. The second example shows the following command:

The “-v” means that we want verbose output, which is exactly what we received. Open up the code again and add a space after the “18” in the docstring. Then re-run the test. Here’s the output I received: 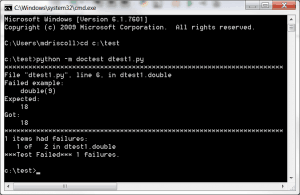 The error message says it expected “18” and it got “18”. What’s going on here? Well we added a space after “18” to our docstring, so doctest actually expected the number “18” followed by a space. Also beware of putting dictionaries as output in your docstring examples. Dictionaries can be in any order, so the likelihood of it matching your actual output isn’t very good.

Running doctest Inside a Module

Let’s modify the example slightly so that we import the doctest module and use its testmod function.

Here we import doctest and call doctest.testmod. We pass it the keyword argument of verbose=True so that we can see some output. Otherwise, this script will run with no output whatsoever, signifying that the tests ran successfully.

If you do not want to hard-code the verbose option, you can also do it on the command line:

Now we’re ready to learn how to put the tests into a separate file.

Running doctest From a Separate File

Let’s run this test file on the command line. Here’s how: 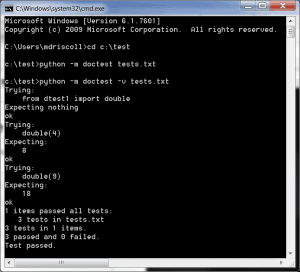 You will notice that the syntax for calling doctest with a text file is the same as calling it with a Python file. The results are the same as well. In this case, there are three tests instead of two because we’re also importing a module. You can also run the tests that are in a text file inside the Python interpreter. Here’s one example: 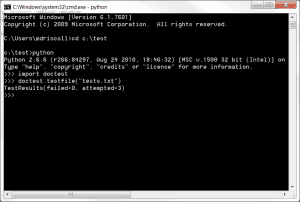 Here we just import doctest and call its testfile method. Note that you need to also pass the filename or path to the testfile function. It will return a TestResults object that contains how many tests were attempted and how many failed.

At this point, you should be able to understand how to use the doctest module effectively in your own code. You should go and read the doctest documentation as there is additional information in there about option flags and exceptions that you might find useful. Have fun and happy coding!

2 thoughts on “Python Testing with doctest”