PyDev of the Week: David Wolever

This week we welcome David Wolever (@wolever) as our PyDev of the Week. David is the co-founder of PyCon Canada and Akindi.com â€“ a small company that's making multiple-choice bubble sheet tests a little bit less terrible. He is also the author of the nose-parameterized project and the pprint++ project. You can also check out what other projects he contributes to on Github. Let's take a few moments to get to know David! 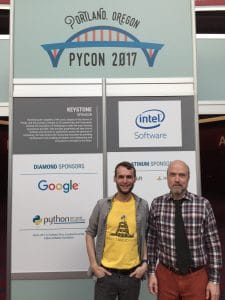 Iâ€™m a long-time Python fan and startup founder from Toronto, Canada. I dropped out of software engineering at the University of Toronto when I realized that I was interested in building software, not proving runtime bounds of graph search algorithms (although Iâ€™m incredibly grateful to the people who do enjoy that), and Iâ€™ve been working with small startups ever since.

In 2012 some friends and I started PyCon Canada, and Iâ€™m incredibly excited that itâ€™s going to be held in MontrÃ©al this year (get your tickets now, because theyâ€™re going to sell out: https://pycon.ca)

I write quite a bit of JavaScript at my day job, and Iâ€™m embarrassingly proficient in Bash. Iâ€™ve also written a nontrivial amount of code in C, C++, PHP, and Go.

My favourite language, though, is SQL. I take an unhealthy amount of joy from working with SQL (and, specifically, Postgres).

The next language I invest in will be something with a strong, static, type system. Maybe Flow? TypeScript? Iâ€™m not sure yet. But Iâ€™m tired of all the time I waste on issues the computer should have detected for me.

My main project is my company, Akindi. Our product is a Scantron-style multiple-choice bubble sheet grading system thatâ€™s less terrible than anything else on the market. (Un)fortunately weâ€™ve grown enough that I donâ€™t get to do much coding day-to-day, though.

As far as open source projects go, Iâ€™ve got a couple little ones that Iâ€™m proud of:

ohhâ€¦ thatâ€™s a tricky question. A few that come to mind, though:

Thatâ€™s a fantastic question, and my honest answer is that Iâ€™ve got no idea.

I hope, though, that the effort to build clean, usable APIs will continue. Pythonâ€™s APIs are steadily getting betterâ€¦ but I still have to check StackOverflow each time I need to convert a datetime to a timestamp or visa versa.

Itâ€™s annoying! Because everyone wants to hire them, which is making really difficult for me to hire them ðŸ˜œ

str.partition is incredibly useful and almost unheard of. Everyone should use str.partition!