PyDev of the Week: Reimar Bauer

This week we welcome Reimar Bauer (@ReimarBauer) as our PyDev of the Week! Reimar is a core developer of the popular Python wiki package, MoinMoin. He has spoken at PyCON DE, FOSDEM and EuroPython about Python. Let's take a few minutes to get to know him better!

I am a programmer from JÃ¼lich, Germany. Thatâ€˜s a small town between Aachen and Cologne.

I work at the Forschungszentrum JÃ¼lich GmbH. Employees research in the fields of energy and the environment, information and brain research with the aim of providing society with options for action facilitating sustainable development.

My work is related to atmospheric science. 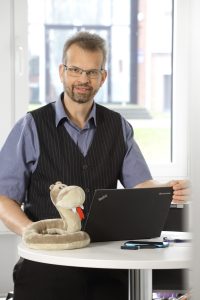 I wrote a few books in the past years about data structures and about IDL, one of my first science related programming languages, developed by Ray Sterner in Boulder, Colorado.

In 2012 I was elected to the board of the German Python Software Verband. I helped to organize several Python Events in Germany, several PyConDE and the famous EuroPython in Berlin. I stepped down from this position and I left in 2017 because I needed and wanted to spend more time with my family.

I have been a fellow of the Python Software Foundation since 2013.

I used to play trombone in a Big Band, but had to take a break because I just couldn't find the time this hobby needs. I enjoy sightseeing, hiking, sociocracy3.0, meeting a lot of different people. And sometimes I play an augmented reality game named ingress.

In 2019 the 10th PythonCamp Cologne Germany, a classic barcamp, will be the next community project Reimar Bauer is involved in.

It was because of the MoinMoin Software. I had an idea. I wanted to have a Gantt chart view in MoinMoin.

I got all help needed doing that, and learned to use IRC ;), too, and had a start into the Python Open Source World. In 2003 I used 1.5.2 . Later I wrote many plugins for MoinMoin and a description with examples about the API.

I have only one favorite, and thatâ€˜s Python. It also plays a role what my colleagues need for their work. I still maintain a large IDL library, but since development froze about 2013, we moved on to Python. I also know Fortran, but stopped using it.

Since 2016 I have been maintaining and developing the Mission Support System. This project is completely open source, Apache 2.0 licenses. This software is used to interactively plan aircraft missions for atmospheric science.

Because of the project I also have become a maintainer for an amount of conda-forge feed-stocks. And because of my love for pyfilesystem2, I started a qt5 file picker.

Pyfilesystem2:
Work with files and directories in archives, memory, the cloud etc. as easily as your local drive. Write code now, decide later where the data will be stored; unit test without writing real files; upload files to the cloud without learning a new API; sandbox your file writing code; etc.
https://pyfilesystem2.readthedocs.io/en/latest/

netcdf4:
NetCDF is a set of software libraries and self-describing, machine-independent data formats that support the creation, access, and sharing of array-oriented scientific data.
http://unidata.github.io/netcdf4-python/

Which Python communities do you want to mention?

The German Python Software Verband, which is focused on the PyConDE and the EuroSciPy conference series but also supports a lot of smaller communities similar to the PSF.

The Euro Python Society, which is focused on the EuroPython conference

The Python Software Foundation - the organisation which over years tied everything together. Organizes the Pycon US and also helps smaller communities with grants.
Thanks to all of you for your time, and for doing such a great job!

What made you decide to work on the MoinMoin project?

The community: Helpful, warm and welcoming folks. I continued working on it because we were able to use MoinMoin as project wiki on any of our measurement campaigns for our institute. There we have to show model forecast data, manage pages with different access rules, provide a lot information to participants. Another use case is to create sphinx latex documents from reST formatted wiki pages.

Can you tell us some of the things you learned as a dev on MoinMoin?

I learned about a lot of tools, how to write proper unit tests, web server options; I learned from bugs, too. I also enjoyed new contacts to communities. Also the time as mentor for students during google summer of code was a great time. We were at the bleeding edge and solved a lot browser based issues or at least found a way to bypass them.

Would you do anything differently if you were able to start over from scratch?

We started with moin-2. But got stuck. A reason may be the unique selling point of wiki itselfs is wide spread meanwhile. Also many comparable tools exist, and many developers who just want to stabilize some project are not that interested in this kind of software mechanism. There are just too many options for this nowadays. As we have already spent much time replacing a lot of our self made model and views in moin-2, I would prefer to finish this.
We currently reunite devs and also build a new core team.

Thanks for doing the interview, Reimar!