This week we welcome Marlene Mhangami (@marlene_zw) as our PyDev of the Week! Marlene is the PyCon Africa (@pyconafrica) chair, the co-founder of @zimbopy and a director for the Python Software Foundation. Let’s spend some time getting to know her! 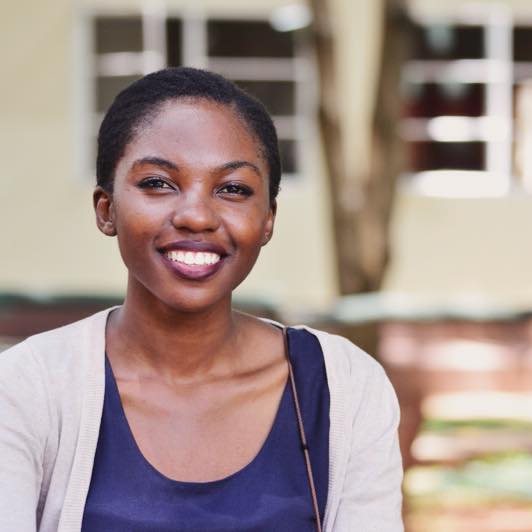 Sure, in college I studied molecular biology. I was actually in the schools pre-medicine track because I initially thought I wanted to become a doctor. Looking back on it now I laugh because I hate blood, just the sight of it in movies makes me shut my eyes tightly, so I’m genuinely happy that didn’t work out! I went to a liberal arts college and appreciate that I had the space to take courses in other fields like philosophy and politics which I really enjoy.

I get asked about what hobbies I have quite often, and I’m not sure if I have anything I do consistently enough to call a hobby. I read, and sometimes run, and love to journal. I also occasionally paint, but the last time I told someone I painted they asked me where my studios were and started listing off artists that I had never heard of before, so I like to disclaimer that I don’t paint in a way that is cultured or sophisticated but just as a way to express myself and have fun.

For a good chunk of my college, I was studying in the United States. I remember coming home one summer and being really aware of how different Zimbabwe was from the U.S. From really small cultural differences like how people address conflict (which is something Iâ€™m still trying to figure out with my US friends) to much more impactful things like access to knowledge and education.

I decided that I wanted to stay in my country and start being more involved with empowering my local community. For a number of clear and obscure reasons, I also decided that I wanted to leverage technology to help me do that. As I’m writing this out I’m actually remembering a great conversation I had with one of my friends. She had initially been a math major and then suddenly switched to computer science. I remember her telling me how much she enjoyed building stuff with code and how useful it was. She had created a program that could predict the warmest pathway to walk through on campus (she was also an international student who struggled with the cold, so both of us agreed that this was an extremely useful invention.) I also had a really vivid dream that made me re-evaluate what I was doing with my life.

All of these things led me to start googling around and I actually ended up organizing a meetup. It was there that I got introduced to one of my co-founders, Ronald Maravanykia, who was at the time running a Django girls workshop in Harare. He introduced me to Python as a great educational tool for teaching programming to people who donâ€™t have a computer science background. I use Python primarily to help with teaching for our non-profit ZimboPy, so while I don’t use it in my day job, I really enjoy sharing it with the girls we teach.

Because I’m mainly self-taught I haven’t tried that many other languages. I know HTML, CSS and the basics of Javascript and PHP, but outside of that not much else. I’ve recently been feeling the need to increase my knowledge of some of the other languages, so I’ve been trying to work on some projects that could help me do this. I’m really interested in game development and VR and I know C++ plays a big part in that industry, so that’s something I’m wanting to learn for sure! I might take some formal classes on this if I can get to it. I would definitely say Python is still my favorite language, this might change as I go along though, who knows 😉

Like I mentioned earlier I’m really interested in game development so I’ve been using Pygame to work on a game as a fun project. It’s really in the early stages and is honestly not great, so I’m not willing to show anyone what I have yet, haha, but its been fun to do. I’ve also been playing around with Circuit Python and the Adafruit boards. I’m hoping to host a Zimbopy workshop using these soon. Its been a super busy few months, but I’m really looking forward to getting that going. Finally, I’m trying to get a personal blog/website up. I’ve bought a domain name and everything! I’m just in the process of building it and thinking of relevant content that will make it as riveting as possible! Those are the main personal projects I’m working on right now.

Well at this exact moment I’d have to say the Circuit Python libraries. I’m really enjoying playing around with hardware programming. The Adafruit boards I got at Pycon this year sent me into a spiral of lights and sound haha! I generally think using hardware makes learning and experimenting with Python really fun. I’m usually thinking about how I can make learning the basics of Python easier to teach to the people in my community so that’s why I’d say it’s my current favorite.

How did you get involved in organizing ZimboPy?

Zimbopy is a non-profit that my friends Ronald Maravanyika and Mike Place co-founded with me. The goal of it is to give girls in Zim access to knowledge and experiences they wouldnâ€™t necessarily get anywhere else in the country. I’m really passionate about empowering African women, and I think this was one of the best ways I could think of tangibly doing so.

What are you hoping to accomplish while you are working with the Python Software Foundation?

The global Python community is growing at an exceptionally fast rate. I’d like to make sure that the community has resources and structures that can help that growth continue to be healthy and positive. The Python community is one of the kindest and most diverse communities I’ve ever encountered. I’m really excited about making sure that same kindness and diversity is translated well into new and upcoming communities around the world.

Well, I’ve just finished working with an amazing group of organizers to host the first-ever Pycon Africa. I think it went really well and I think we had such a great lineup of talks. We’ll have the talks uploaded on Youtube in a few days so I’d encourage anyone reading to follow our page @pyconafrica to see them. We’re also starting to plan for next year, so definitely think Pythonista’s interested should think about attending.

Thanks for doing the interview, Marlene!

1 thought on “PyDev of the Week: Marlene Mhangami”