Let’s find out how you can create a ComboBox that allows this functionality! 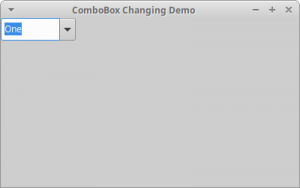 The first step when trying something new out is to write some code. You’ll need to create an instance of wx.ComboBox and pass it a list of choices as well as set the default choice. Of course, you cannot create a single widget in isolation. The widget must be inside of a parent widget. In wxPython, you almost always want the parent to be a wx.Panel that is inside of a wx.Frame.

Let’s write some code and see how this all lays out:

The main part of the code that you are interested in is inside the MainPanel class. Here you create the widget, set its choices list and a couple of other parameters. Next you will need to bind the ComboBox to two events:

The on_selection() method is short and sweet. All it does is update cb_value to whatever the current selection is.

Give the code a try and see how it works!

Adding the ability to allow the user to update the wx.ComboBox‘s contents isn’t especially hard. You could even subclass wx.ComboBox and create a version where it does that for you all the time. Another enhancement that might be fun to add is to have the widget load its choices from a config file or a JSON file. Then you could update on_text_change() to save your changes to disk and then your application could save the choices and reload them the next time you start your application.

Have fun and happy coding!