PyDev of the Week: Jessica Garson

This week we welcome Jessica Garson (@jessicagarson) as our PyDev of the Week! Jessica is a developer advocate at Twitter. She also teaches Python at New York University. You can see some of what she's up to over on Github. Let's spend some time getting to know her better!

I’m currently a Developer Advocate at Twitter, where I work to make sure developers have good experiences using the Twitter API. What that means is that I write example code, speak at conferences and create blog posts. I also make noise music with Python and perform regularly in the New York area under the artist name, Messica Arson. Before working in technology, I worked on political campaigns. 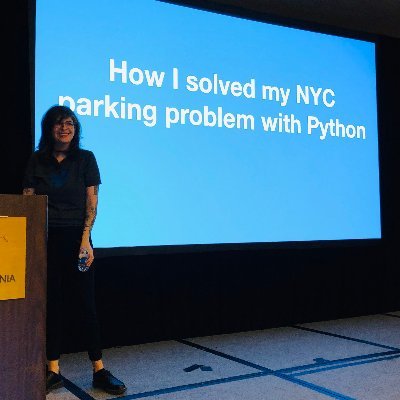 I started learning how to code on my own in 2010, which proved to be very difficult. I was working at a political data consulting company, and all of the backend code was written in Perl so I started reading a book on Perl. A coworker saw my book and pulled me aside and mentioned that if he were learning how to code today, he’d learn Python. Shortly thereafter, I found a community group in Washington, DC called Hear me Code which was free beginner-friendly classes for women by women.

I’ve been growing my skills in JavaScript lately. I’m excited to learn more about TensorFlow.js. In the past year, I’ve grown my skills in R quite a bit as well. I also make music sometimes using Ruby and Haskell.

I’ve been excited about the R package, reticulate which allows you to run your favorite Python package in R. I recently figured out how to run the Python package for search-tweets-python inside of R.

FoxDot, the Python wrapper for SuperCollider that allows me to make weird danceable noise music with Python. I perform monthly or so in the NYC area and to think that I do that with my favorite programming language is exciting. I’d like to record a new album sometime this year.

How did you get involved in organizing tech conferences/meetups?

I started teaching people how to code pretty shortly after I started learning myself. The environment that I got started in was so supportive. I was so proud of what I was building that I wanted to share what I was creating with others so I started speaking at meetups and conferences locally. I realized at some point that I could also run and curate these events too.

I see you used to teach Python at NYU. Any exciting experiences you would like to share?

Teaching was an incredibly empowering experience. It was so exciting to watch my students learn and grow during our time together. Recently I ran into a former student at PyGotham. It was great to see someone who I taught who is now teaching Python classes on machine learning.

Thanks for doing the interview, Jessica!