This week we welcome Abigail Mesrenyame Dogbe (@MesrenyameDogbe) as our PyDev of the Week! Abigail is active with the PyLadies organization in Africa and has also helped organize PyCon Africa. Abigail is also a fellow of the Python Software Foundation. 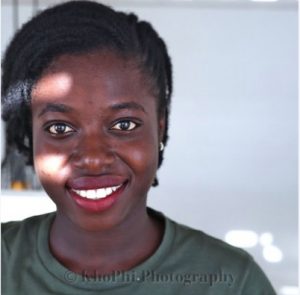 Let's spend some time getting to know Abigail better!

I worked with the Internal Audit Department at the Ghana Community Network Services Limited (GCNet) after obtaining a BSc in Computer Science and Engineering from the University of Mines and Technology in Tarkwa, Ghana. Growing up, I struggled with Mathematics and did lots of drawings, paintings, and singing during my hobbies. My hobbies became numerous as I matured so much that I no longer make drawings and paintings but I've found happiness in playing with African beads to make accessories and I still sing a lot, although mostly to smaller groups or to myself.

I have a great interest in sports such as volleyball, football and swimming as well. During my final year at the university, I was elected as the captain of the women's volleyball team. We had lots of training sessions and won a few matches. I am actually impressed with how far the team has come after I completed school.

Also, I have a keen interest in Tech Community Building and I find joy in helping others grow in their career.

In 2017, a friend shared a registration link to the first Django Girls event in Accra. It involved teaching girls how to build websites using Python and Django. I took a chance at applying since I had never used or studied Python during my four-year stay in School learning Computer Science and Engineering. After the event, I learned how simple it was to use the language as compared with the other languages I had learned in school. The syntax was easier for me to understand and I have been particularly intrigued about the amazing Python Community. I have made friends from this community who have had a great influence and impact on my life.

The programming languages I learned in University included Java, C++ and Visual Basic. For Web development, we did some html and css as well.  I self-taught myself C which I used in my final year project work, published here. This project is about a GSM Communication Based Smart-Prepaid Energy Meter Monitoring System.

I know that for every project or solution to an idea it is important to use a programming language suitable to achieving your goal. Last year, I explored automation with Python and have started exploring it more in Data Analysis and Visualization. So yes, I think Python is currently my favorite language.

I am currently building my personal website using Django and I am also looking forward to learning and practicing more data analysis and visualization combined with automation.

A library like plotly which helps to make interactive, publication-quality graphs.

How did you get involved with organizing PyLadies in Africa?

After my first Django Girls Accra experience as a mentee, I was encouraged by Andrew Smith (Silent Works) to teach other girls how to code at the next event. I took the challenge and met other amazing Pythonistas who had also started putting plans together to start the Python Software Community in Ghana (Python Ghana). We traveled a lot throughout the country teaching more girls and encouraging them to help other girls as well. At the time, I was the only female coach amongst a lot of males introducing girls to Python and Django so I had a keen interest in getting more ladies to become coaches. Later, I was then contacted by Mannie Young to lead the PyLadies Team in Ghana, which has been great so far.

I have worked with a lovely and very supportive team. Together, we have been able to start six different PyLadies Chapters which run on their own. We organize tutorial and meetup sessions mostly about Python and other soft skills such as "How to speak at Conferences". At PyLadies Ghana, we share ideas and also look out for each other in terms of job opportunities. One biggest achievement for me was the fact that during Django Girls PyCon Africa 2019, all the coaches were females and from the PyLadies Community with a few being mentees of previously held Django Girls events in Ghana.

Also, I have had the opportunity to help other PyLadies kickstart their communities outside of Ghana in countries like Ethiopia, Liberia, and Zambia. I personally look forward to helping more Pythonistas start their Python Communities and I believe that we grow when we hold hands together.

What challenges do women in tech in Africa face?

Even though the women in tech agenda keeps growing by the day, there is a need to focus on providing more platforms to women in tech. Challenges range from lack of access to finance, to cultural stereotypes and networking with other women in tech challenges. To make quick progress, we need to create more role models who will help guide the next generation to success.

Currently, I and my team at Future Bots are working on raising the next generation of women in STEM. Our research so far shows that few girls pursue STEM fields at the Tertiary level and we see a drop of interest after school which is as a result of factors like poor confidence and accessibility to role models. We want to create a space for girls in Primary, Junior High and Senior High Schools by tackling the current gap between academic training and the needs within the business community. This will be achieved by intensively designing a curriculum focused on engaging girls in basic IT skills, using illustrations and practicals to help them understand Mathematics and Science respectively. We believe that this will help them develop their skillset through critical thinking while discovering and innovating, coupled with exposing them to careers in STEM.

Kindly send an email to contact.futurebots@gmail.com if you want to extend any help or for future events.

Can you share some of your experiences at PyCon Africa?

Being a co-organizer at PyCon Africa has been amazing and I really look forward to PyCon Africa 2020. In 2019, the team had several meetings and tasks before the first-ever PyCon Africa took place. The experience collaborating with great minds was simply awesome. We were in different time zones but still worked together effectively.

The talk tracks, workshops and sprints were absolutely educational. I worked intensively on Diversity and Care and we saw that approximately one-third of our speakers and attendees were women . The representation from Africa was amazing. We published a report of PyCon Africa 2019 here.

I am looking forward to doing an amazing job with the team during PyCon Africa 2020.

I appreciate the team at Python Ghana. We work tirelessly for the community and we're hoping to do more. Thank you, Mike, for this opportunity.

Thanks for doing the interview, Abigail!