This week we would like to welcome Yasoob Khalid (@yasoobkhalid) as our PyDev of the Week. He is the writer behind the Free Python Tips blog. Let’s spend some time getting to know him better. 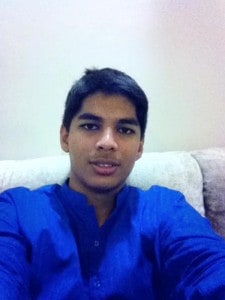 Hi there! I am from Pakistan. My hobbies include Football, movies and programming. Regarding my education, I am in college. I have learned programming mostly through books, online forums and nagging professional programmers. I have a lot of interest in blogging and public speaking. Last year (2014) I got a chance to speak at EuroPython which is the biggest Python conference in Europe. I was the youngest speaker over there! I myself learned quite a lot of stuff there.

One day I was using Visual Basic and these Python tutorials kept popping up whenever I searched for a tutorial in Visual Basic. The name of the language made me think that it’s some toy language. Who names a language “Python”? Whatever, I decided to give it a go. After that day I have never looked back at any other language.

I know Java, some C++, Visual Basic and C#. My most favourite language, as you might have guessed, is Python.

I am mostly doing Open Source contributions. I am also writing a book on intermediate Python. It is basically a best practices book and teaches you some hidden and often overlooked features of Python which can greatly enhance your productivity.

Well this is variable. My interest changes over time. Right now my most favourite ones are Scrapy and Flask.

Why did you decide to write a blog about Python?

I once heard from someone that the best way to learn something is to learn it as if you are going to teach it to someone else. I just applied this mantra and decided to start a blog. Primarily to document my day to day learnings and secondly to teach others what I have learned. I am glad that I started blogging.

Now I am taking this one step forward and writing a book. It would be coming out this year.

Python is really going strong. Django and Flask have boosted its use in web development and libraries like SciPy, NumPy, Pandas and the likes have encouraged scientists and data analysts to adopt it. It has become an integral part of many people’s day to day jobs. I don’t see it going out of fashion anytime soon.

Nothing much. However I do want to say one thing. If any youngster is reading this then I want to let him/her know that your age should not ever prevent you from learning something. Nowadays there are initiatives like Hour of Code but back then when I started to learn programming there was nothing like it. I was discouraged by a couple of folks when I asked them to teach me. They said that I was too young to learn to code and that it would be really difficult for me! I kept on working hard. I decided not to lean on any teacher and instead learn it using Google and ebooks. I wanted to prove them wrong and now I am able to say that I have succeeded. However there is one personality which has helped me the most along the way. He is a guy named Philipp. He is a German and he always supported me. In my early days of programming I used to ask a LOT of questions. I used to email a couple of prominent programmers. No one replied except Philipp. He answered every question which I had and encouraged me to move forward. Without him I wouldn’t have reached this stage. If anyone of you has any kind of question about programming, Python or me then just email me and I would be really happy to help you out.

3 thoughts on “PyDev of the Week: Yasoob Khalid”