This week we welcome Brian Schrader (@sonicrocketman) as our PyDev of the Week. Brian blogs about Python and various other subjects of interest. You can get a taste of what open source projects he contributes to on his Github account. Let’s spend some time getting to know Brian better. 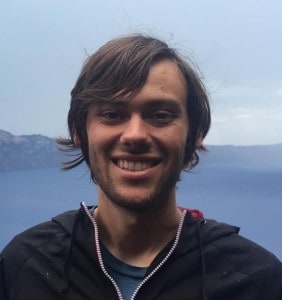 I started programming in college, on a TI-84 calculator. Later, I took a programming course in C, which was a required part of my Aerospace Engineering program, and I loved it far more than I did Aerospace.

My first projects were building websites (like my blog), and variousÂ  programs to do my homework for me. Then, during my senior year I got a job as a web developer building enterprise apps. A year later, while at an open micÂ  night, I met a guy who got me a job at The Scripps Research Institute as a bioinformatics programmer.

Other than that, I play guitar, write for my blog, and hang out at my local Python Users Group where I work on far too many open source side projects.

I was in college, programming in PHP, and a friend told me to use Python instead. I tried it out, and loved it. It’s so much nicer than PHP.

I’ve toyed with lots of other languages, but the ones I’d be confident enoughÂ  to claim that I ‘know’ are C, Objective-C, Java, and Javascript. Out of all of those I prefer C or Javascript. One for the low level, one for the high level.

Right now I’ve got a couple projects going. The first is an automated coffee pot that complies with the HTCPCP protocol. It’s mostly a joke, but that’s what makes it fun.

The second is a webapp for tabletop RPGs (i.e. D&D). The goal is to bring the game into the 21st century, without removing any of the classic elements like rolling dice. Â

I really like Flask and Requests. They both really make it easy to write powerful, expressive code.

Learning to program can be scary. Start with a simple project, like building a website. Use as few tools as possible, that way you learn how it actually works. Oh and don’t fear the command line, it’s the best tool you have.

The only other thing I’d say is: start a blog. Programmers are people who think for a living, and writing helps you think. Whenever you’re stuck on some problem write a paragraph explaining the problem and post it, then when you have a solution post that too.

1 thought on “PyDev of the Week: Brian Schrader”