I am happy to announce another book that I have been working on called Python Interviews from Packt Publishing. Here is the blurb from their website: 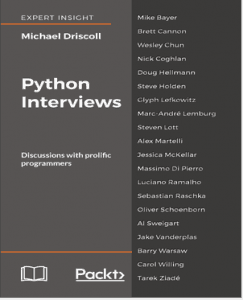 In this book, Mike talks Python with core members of the Python community, such as Steve Holden (former chair of the Python Software Foundation), Mike Bayer (creator of SQLAlchemy), Brett Cannon (core Python developer), Glyph Lefkowitz (creator of Twisted), Massimo DiPierro (creator of web2py), Oliver Schoenborn (creator of PyPubSub), and many, many more. The interviews are full of insights into the minds of successful programmers, the inner workings of the Python language, the history of Python, and humorous anecdotes from the thriving Python community.

Python Interviews is currently available for pre-order and should be published in late February 2018 or March 2018.

Note: These are brand new interviews and are not taken from my "PyDev of the Week" series. However there is some cross-over in this book to those interviews since some of the same topics were covered.