This week we welcome Arun Ravindran (@arocks) as our PyDev of the Week! Arun has a fun Python blog that is worth checking out. He is also the author of Django Design Patterns and Best Practices. Let’s spend some time getting to know Arun. 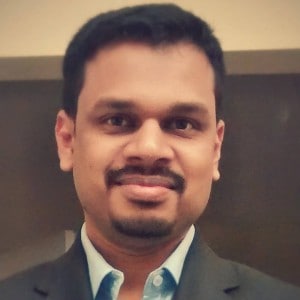 I grew up in a small town called Thrissur in the lush green state of Kerala, India. When I was in secondary school, the personal computer revolution had just started. We were a bunch of wide-eyed kids playing Prince of Persia or Dangerous Dave and learning to program by creating monochrome moire patterns in BASIC.

Now I am a product manager, husband and father of two wonderful kids. A few months back, my first book titled â€œDjango Design Patterns and Best Practicesâ€ got published. I spend my free time working on open source projects, playing retro video games and traveling.

I learned Python, from the official tutorial (titled â€œWhetting Your Appetiteâ€, I remember thinking that the title looks interesting), when I was studying computer science in Govt. Engineering College, Thrissur in 1998. It was the early days of the open source movement.

I loved many language decisions made in Python like indentation-based syntax and a fascinatingly rich built-in standard library. I found myself agreeing with most of the advice in Zen of Python. Eventually, the user interface of my final year project on image compression was written entirely in Python.

I am a bit of a programming language enthusiast. Iâ€™m always learning new and even esoteric languages. So I stopped counting after I got about twenty languages under my belt. I prefer to learn languages which introduce new ideas and are practical for everyday use.

I enjoy languages which have a strong type inference mechanism like OCaml, Haskell or Haxe. But for most my needs I end up using Python. You could say Python is my go-to language (pun not intended) but my favourites keeps changing. Currently it is OCaml and Elixir.

I am great at starting projects but find it really hard to finish them. So at any given point in time Â I would be working on a crazy number of projects. Among them, I am most excited about Django Edge, a project template that solves a lot of common Django beginners needs.

I am also working on my next book by co-authoring with Anand – which is a book on Emacs for beginners. Other projects include a geography based search engine and a kid-friendly programming language primarily to create games.

From the standard library, I find itertools extremely cool because itâ€™s neat collection of functional tools for working with iterators. Among third party libraries, I find Pandas (and Jupyter Notebook) quite useful for data analysis.

In terms of a library that has the most Pythonic API, I would vote for requests. My favourite framework is, of course, Django.

Python has been extremely successful as a beginner-friendly programming language. Its influence can be seen in a number of modern languages like Julia or Swift.

The future of the language is Python 3. Despite early skepticism, there is widespread adoption of Python 3 now. I based my book on Python 3 because I believe that we need to stop using many outdated constructs like â€œ__unicode__â€ and â€œxrangeâ€, as soon as possible.

I am quite excited about other implementations of Python like PyPy and MicroPython. PyPy is becoming more production ready. It is already one of the fastest Python implementations. MicroPython is a scaled down implementation of Python 3 that works even in microcontrollers. Imagine being able to (re-)program your washing machine or car with Python!

There is a lot of excitement around Python now even though it is older than Java. Some people donâ€™t understand whatâ€™s so great about it. I believe it is the community. Over the years, I have rarely found a group of people who are so open to outside feedback be it suggestions or criticism and have worked to improve the language. So, I am quite optimistic about its future.

2 thoughts on “PyDev of the Week: Arun Ravindran”