I always spend some time thinking about how I want my book's cover to look. When I was designing the Cookbook's cover, I thought mostly about food and chefs. I had originally thought I might have some kind of kitchen scene with mice in chef hats and a snake on the mantle. But I wanted to take the idea of cooking and put a twist on it.

Instead of a kitchen, I thought of cowboys herding cattle and how they usually had a cook with them. So I went with that idea, although I didn't have the herds of animals added to the cover.

To help differentiate the Cookbook from my previous works, I hired a different artist from my previous titles named Liza Tretyakova. You can check out some of her work on Behance or even contact her directly by email (schimmel@inbox.ru) if you happen to need a great artist.

I thought it might be fun for you to see how the cover art evolved as I worked with the artist to get my ideas for the cover turned into reality. Let's start with the first sketch I got from Liza: 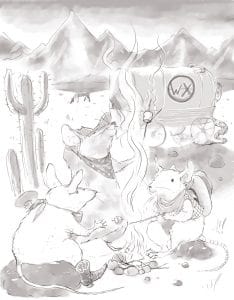 This sketch impressed me quite a bit as my previous artists always gave me much rougher sketches to look at. The next step was to add a touch of color to the cover: 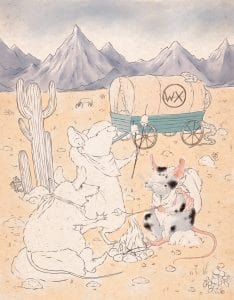 At this point, I hadn't really thought too much about making each mouse unique in its coloring. Liza suggested that idea and I agreed. The next to last step was to add almost full color to the cover: 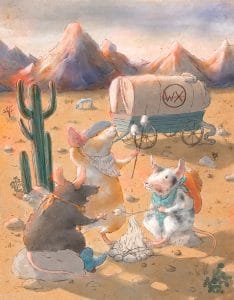 This looked really good so I approved it and Liza finished the cover. As you've probably already seen, it looks like this: 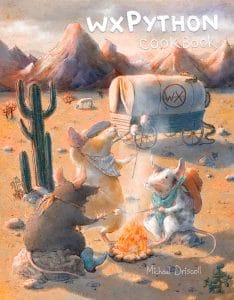 This whole process took Liza and I about a week and a half. I think it turned out quite well!