My Cover Story for Creating GUI Applications with wxPython Book

I thought it would be fun to write a bit about the cover art for my new book, Creating GUI Applications with wxPython. I had meant to post about that during the actual Kickstarter campaign.

My original idea for the cover was to have the mouse directing a Phoenix to attack a snake. The Phoenix is a reference to the code name for wxPython 4 before it was released and you can still see references to Phoenix in the documentation and the artwork on some of the pages for the wxPython project.

In fact, I commissioned that cover to be done. Here's a sketch of it: 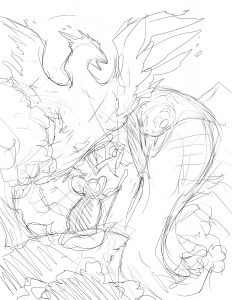 As you can see, the artist had trouble remembering that the snake should be a Python. He continued to make lazy mistakes in the finished product and I ended up scrapping that cover. I am not sure if I will use that cover for a future book or not. I personally like the look of the mouse and Phoenix, but the Python will always bother me.

So I ended up hiring Varya Kolesnikova again for the actual cover of the book. She is the artist who did my Python 201 cover art. You can view more of her art on Behance or Instagram.

Here is her original sketch of my new concept, which was to have the mouse riding the Phoenix and carrying the Python:

I liked her approach much better, although her idea of a Phoenix was very different than my original vision for it.

Here is a color version of the concept art:

I liked Varya's approach to the art and she ended up finishing the artwork as you know today: 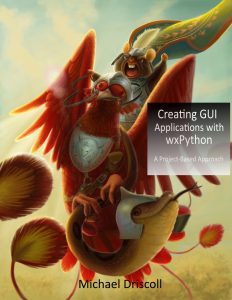 I am hard at work wrapping up the last few chapters of the book. If you are interested in getting early access to the book, you can pre-order it now on Leanpub. The final version of the book will be released in May 2019.